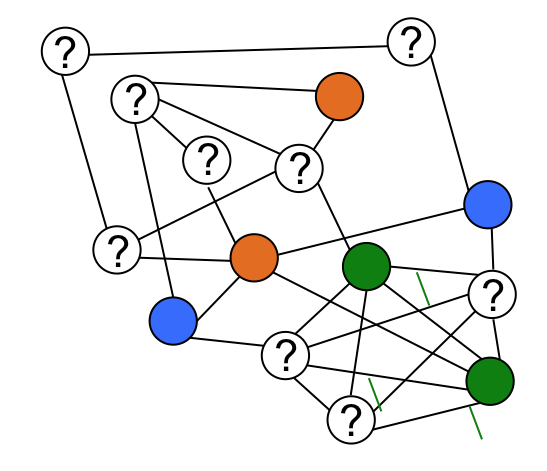 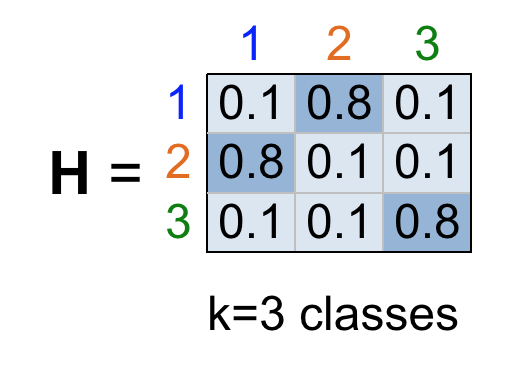 - In real social media, we've got a mixture, namely, a set of affinity scores according to certain classes. - Our task: label propagation from partial labelling

Key idea: center vectors around a fixed value and work with their residuals. Residuals still capture the same semantics as original vectors. Approximate each vector using the shown McLaurin series (proofs are left to the reader).

Products have been converted to sums. Update equations are now linear and can be further analyzed in terms of convergence.

LinBP final belief equations. Note: They no longer depend on messages! Important: These algorithms can be generalized to weighted graphs, and here we use them. If a graph is unweighted, then W = A. Observe how beliefs are "linearly" weighted by W and by the beliefs scores. Substraction term accounts for echo cancellation. D is the degree matrix for graph G. Vectorized form can be obtained by stacking columns; product is element-wise. 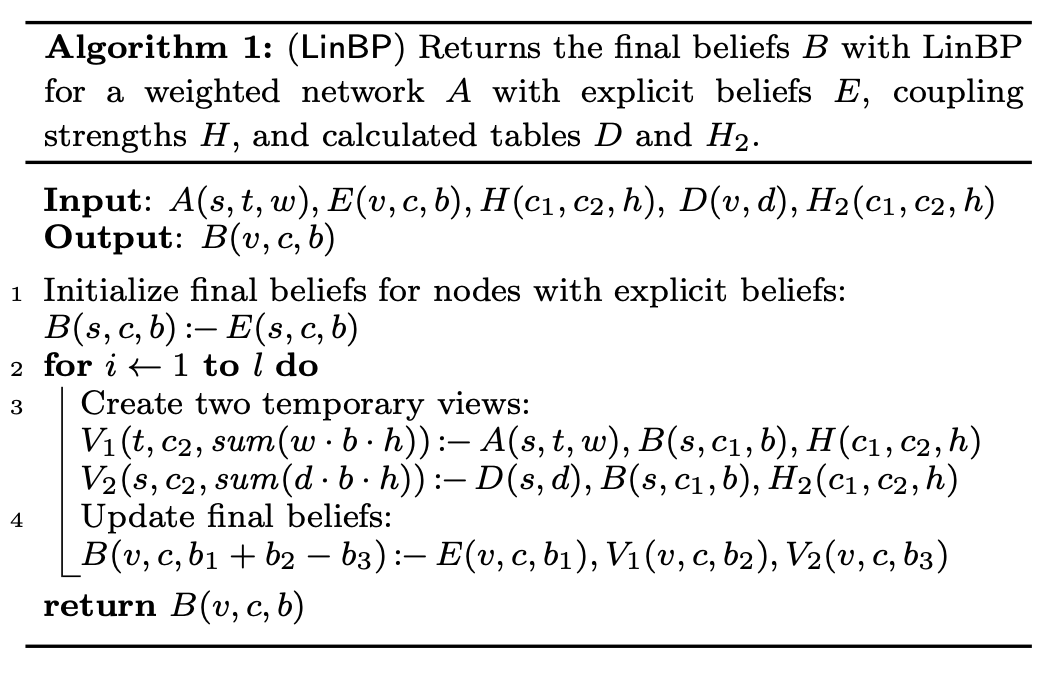 Instead of iterating, just update all the nodes once, proportional to a node's geodesic number Nodes without explicit beliefs have e = 0.

Given node $t$ and geodesic number $k$, we define

Important: after b_hat is computed, the result is "standardized" (subract mean, divide by stand dev). This fact allows epsilons to be cancelled out. Thus, posterior beliefs are independent of scales, which is a free parameter.

Geodesic number tells us the extent to which beliefs will be spreading. Neighbors with same geodesic number receive same information from closest node with explicit belief. 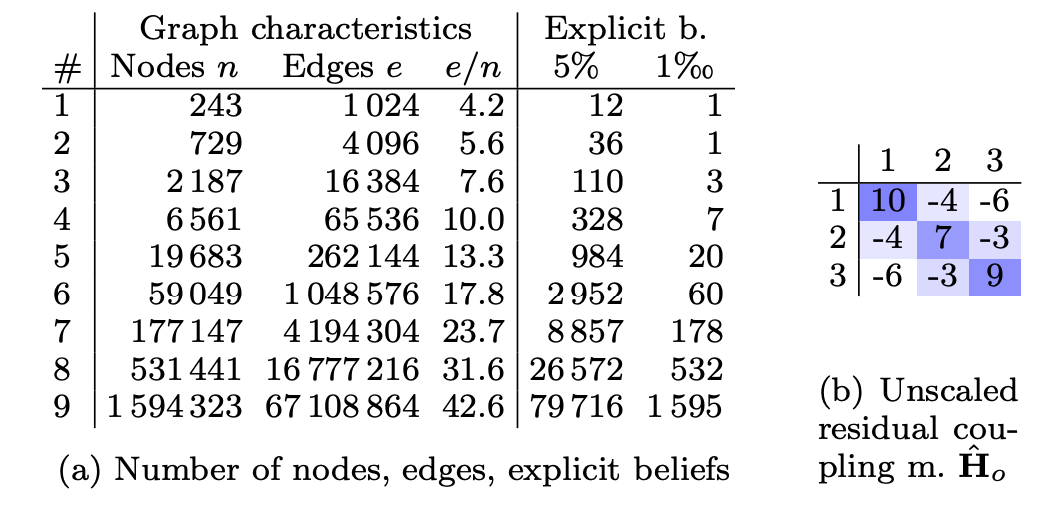 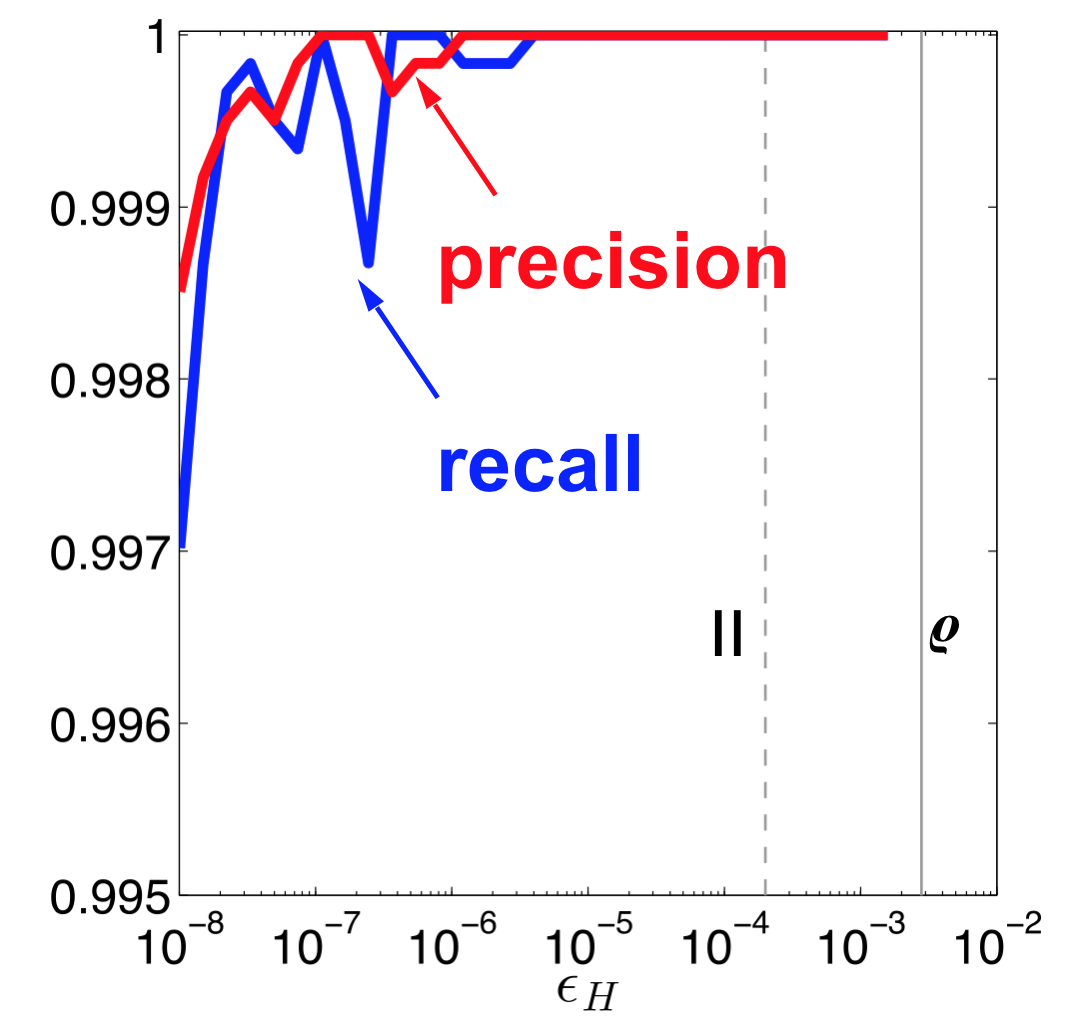 Synthetic datasets are labeled as mentionned. BP is used as ground truth. Varying values of epsilon are sampled. At some point, LinBP gives the exact same results as BP. rho there is the convergence barrier. 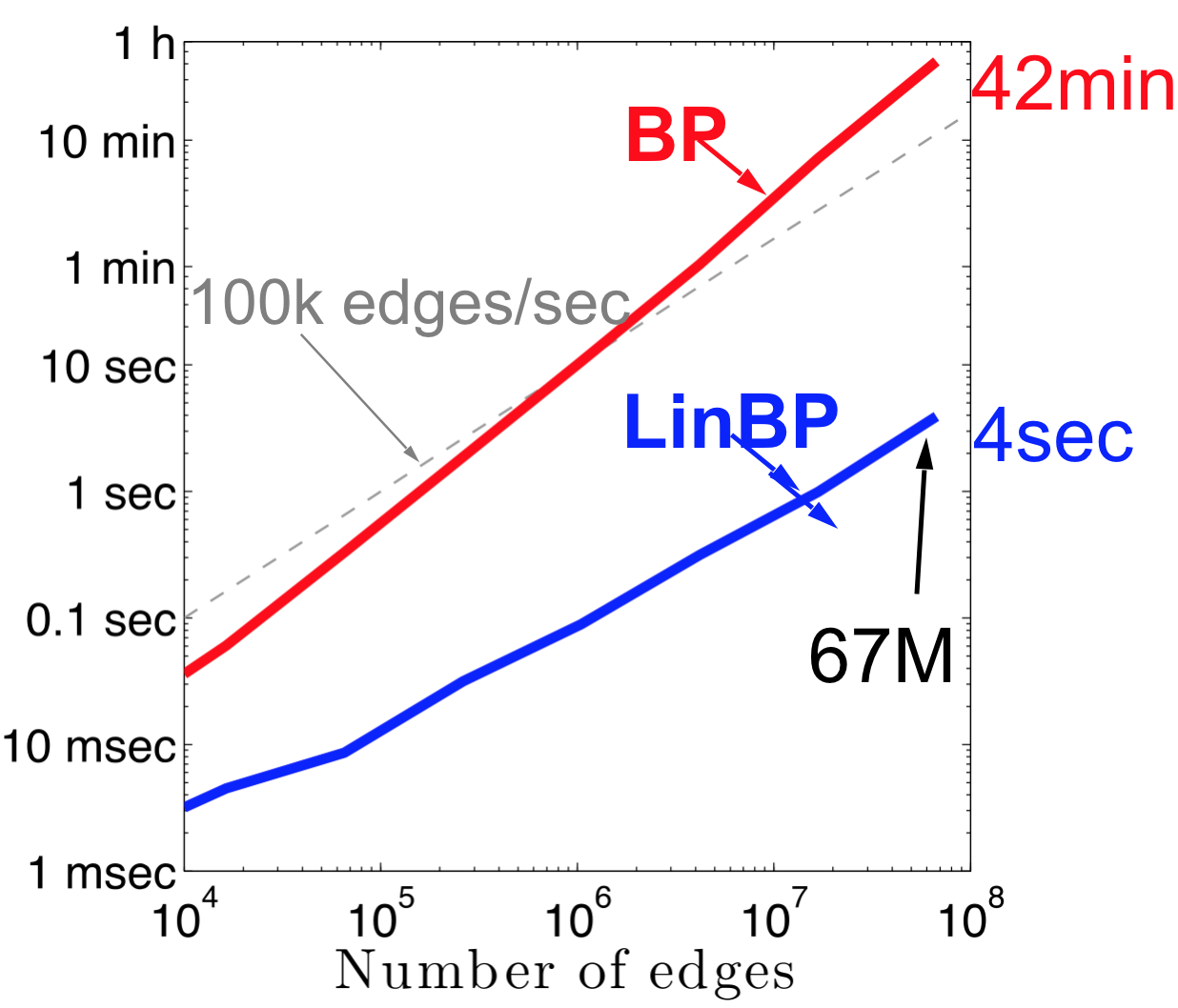 Synthetic datasets are labeled as mentionned. BP is used as ground truth. Experiments performed in Java and SQL. 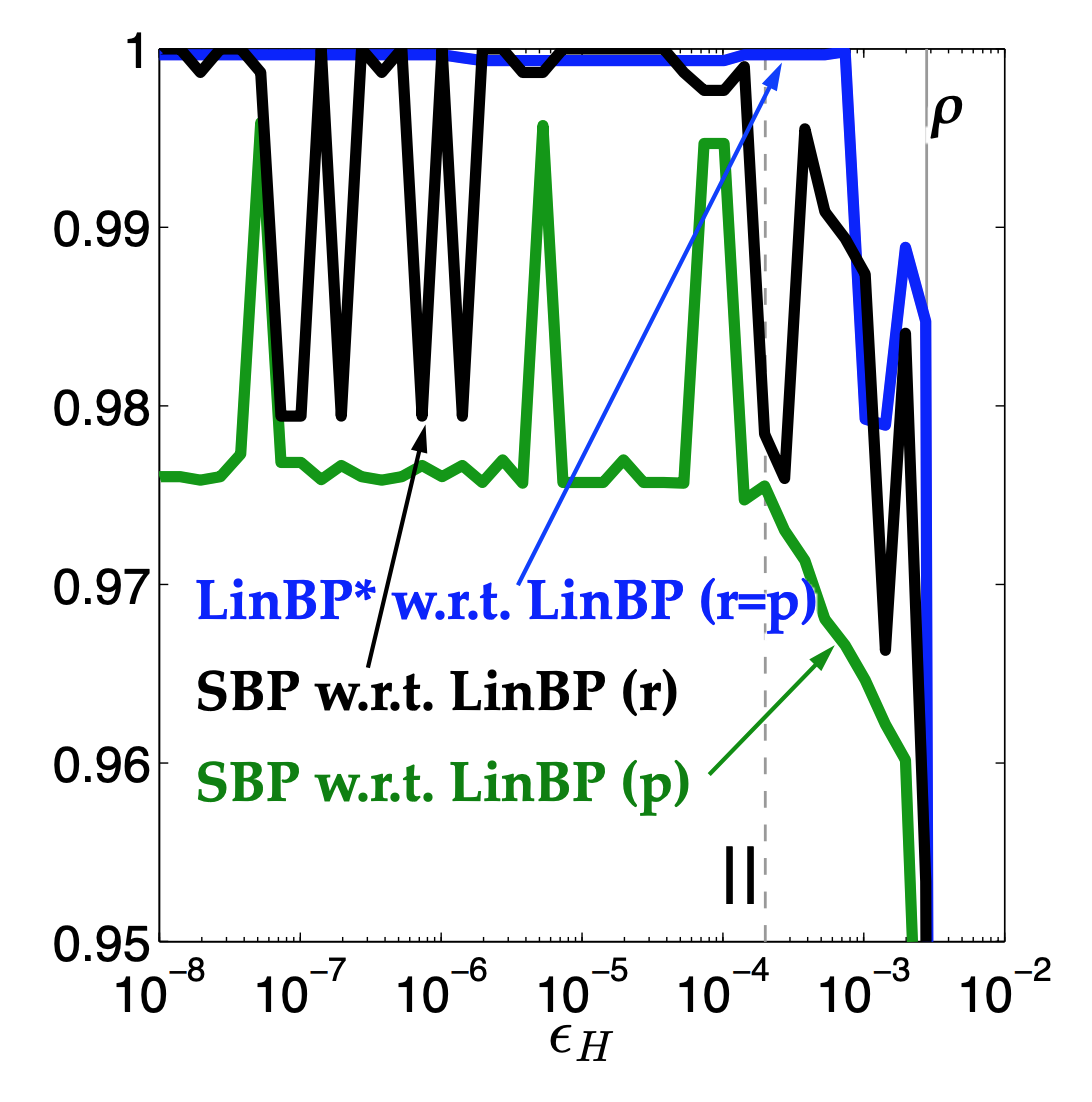 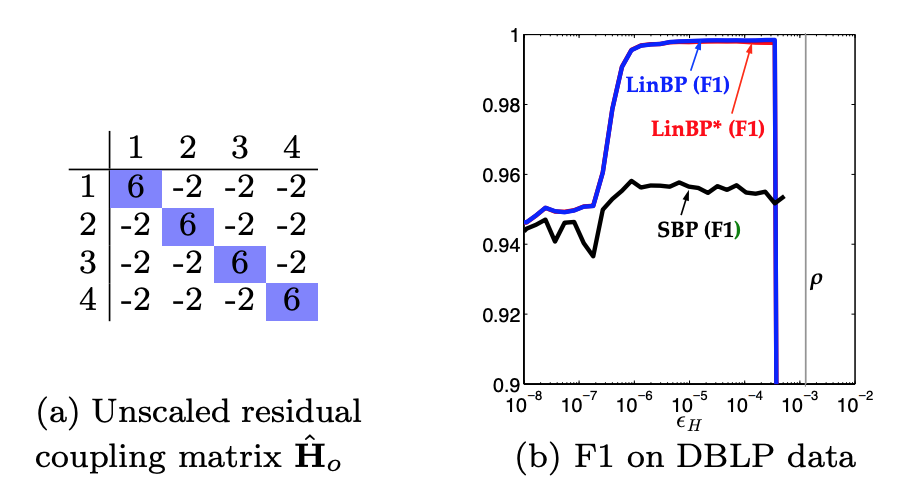 SBP needs fewer iterations to converge and requires fewer calculations for each iteration, on average.

In the experiments, it was faster to update SBP when less than $\approx$ 50% of the final explicit beliefs are new.

BP, LinBP, LinBP$^∗$, and SBP give almost identical top belief assignments (depending on $\epsilon_H$). However, ties can drop the quality of SBP to $\leq$ 95%.